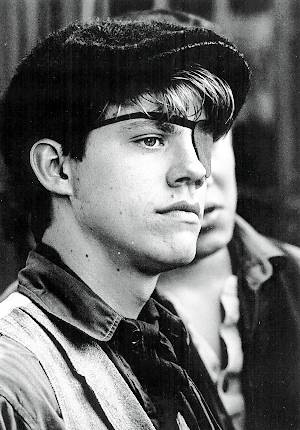 Kid Blink was known as an appealing kid. He happened to have one eye and on the other was an eye patch (was blind in one eye). Kid Blink's real name was Louis Ballatt. Blink was known as the leader of the Newsboys during the strike. Sources guessed that Kid Blink was about 13 or 14 years old. Kid Blink was more powerful then you think. He shut down the news to all of New York City. With him, were thousands of other Newsboys joined together as one to strike against the two most powerful men in New York, Joseph Pulitzer and William Randolph Hearst. Now back then, newspapers were the only media in New York. So taking away the newspapers, was like taking out New York’s internet, radio, and TV access. All they would leave were smoke signals and tin can phones in their place. However, he didn't stop there. Kid Blink also staged various rallies on the Brooklyn Bridge. He organized the rallies with resources that were available to the homeless kids. Now, Kid Blink knew that Pulitzer and Hearst were not going to back down and let some nobody kids win. However, the Newsboys did not back down and stood their ground. Until, Pulitzer and Hearst finally backed down and gave the Newsboys what they wanted. Therefore, Kid Blink went down in history as one of the most amazing, and most shockingly powerful kids in history.